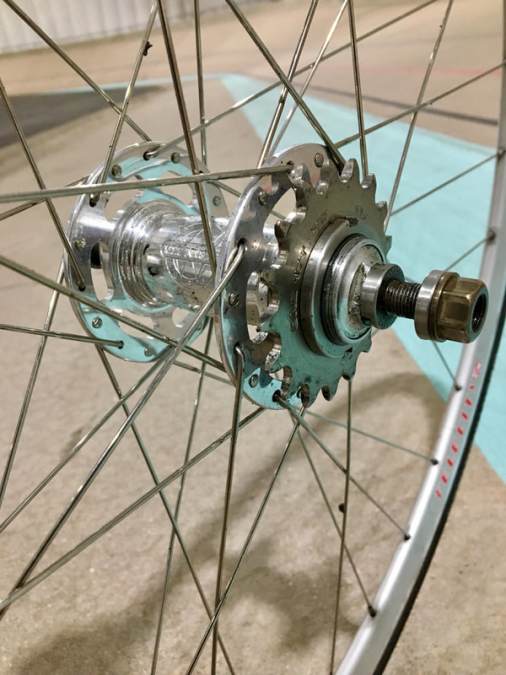 Often times “the way we have always done it” is not the best way…
White Industries definitely took a big risk by trying to make a big change in a world that seems to go out of their way to do things the same way for years on end.  White Industries really put a lot of thought into how to make the track cog/hub interface much better and despite a few minor disadvantages, I really feel like they knocked it out of the park on these.

Their big change was removing the threaded cog/hub interface and replaced it with splines.  The problem with threaded cogs is you can strip the threads after enough abuse.  I have seen it with all brands of track hubs although some definitely hold up better than others.  When you switch to splines, that just isn’t going to be an issue and it is far less prone from damage from operator error.  Especially when you are trashed and prone to making mistakes such as not tightening a cog on all the way before a standing start.

The splines on a White Industries track hub

The Good:
I have been doing my best to trash these hubs over the past 2 years as a wanna-be track sprinter.  I am usually pretty hard on hubs as I weigh around 220lbs and push around 2,000 watts when I am on form.  I also tend to be paranoid about wheel slips so tend to tighten axle nuts way more than needed.  Thankfully these hubs have handled everything I could give them without even flinching despite my abusive ways.

I tried my best to break it with no luck.

Axles are a very common failure point in the track sprint world which is totally different from every other type of bike riding/racing.  When you think about it though, a proper sprint session can easily mean 3-4 gear changes per day.  Multiply that by 3-4 sessions a week and you area really stressing a commonly overlooked part.  White Industries definitely picked the right grade of stainless here as my axle still threads as smooth as when I bought them.  Beyond just picking a great grade of stainless for their axle, they actually took the time to machine their own bronze axle nuts which are as beautiful as they are strong.

Riding the velodrome is pretty easy on bearings so these bearings are still spinning super smooth.  One area with bearings that track bikes can struggle with though is some hubs have a tendency to tighten down the bearing adjustment after multiple gear changes.  The hubs seem to hold their adjustment well though.  I had to adjust them once after a couple month break in and they have held their adjustment since.

Their proprietary cogs are also works of art and also some of the smoothest running cogs I have ever run.  I ran Dura-Ace cogs on my race wheels and

those felt and sounded very rough compared to my WI cogs.  It was so much rougher than I thought my chain might have just been worn and I replaced that and things still felt rough.  It eventually hit me that they nailed the tooth profile on these so they run as smooth and quiet as anything I have tried on the track.

On to aesthetics, these hubs are beautiful, both the polishing and machine work they have done on them are top notch.  They have very big flanges which makes for a super stiff wheel build as well which is nice when sprinting into the banking at 40+ mph.

The Bad:
No product is perfect though and as much as I love these hubs, there are a few things I wish would be changed on them.

While I feel their splined cogs are brilliant, they do have their issues.  The first being, you can not go smaller than a 13t on the rear.  Thankfully bigger chain rings are finally becoming somewhat common so this is easy to work around.  When I first started sprinting, it was hard to find anything bigger than a 54/55 so the 13 was a bit limiting.

The other downside to their splined cogs is unless you are using a HED VOLO as your disc/race wheel, you will end up having to buy 2 sets of cogs.  One threaded and one set of WI.  That is not the end of the world but definitely something to consider.

If I could have it my way, WI would make a traditionally threaded track hub as well or even a track hub with their splined system on one side and traditional threads on the other.  Their hubs are so good that I would love to be able to offer them to people that need a good hub but can not be convinced to buy a second set of cogs.

Overall:
If you are willing to spend the money to get a second set of cogs, I think any trackie out there would love the way these hubs hold up and ride.  This is especially true for stronger riders and track tandem riders as their splined system and axles are up for anything you can throw at them.

I love White Industries willingness to take the time and hit to total sales to offer a product that works better than current options although I do wish they would make a hub for people who want to stick to their traditionally threaded cogs.

If you are interested in your own set, shoot me an email HERE and we can discuss options to get you your own set.  If you are ever at the Colorado Springs track, let me know and I am happy to let you give my personal set a go and see for yourself.

You can see more specifics from White Industries by clicking HERE