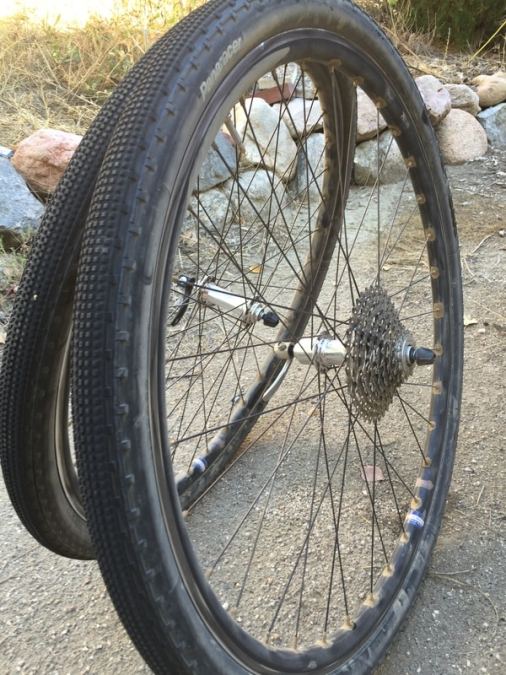 Trust but verify.  Anyone who knows me knows I am a big fan of most of Velocity’s products but even so, when they make a claim saying they have a new rim that is not only wider and stiffer but also 50g lighter than their previous model it is enough to make you raise an eyebrow.  Going off the old trust but verify motto I decided to order a set of Quills to replace my tried and true A23 rims for my cross bike to test things out.  To be fair this review is only for initial impressions of the rim as I have not had them long enough to really test the durability of things like the brake track and spoke bed but I do have enough time on them to provide some insight as to how they built for me and how they rode relative to my A23’s.

The Build:
Pretty uneventful here really.  The weight came in around as advertised at 410g.  They built like you would expect any high end rim to build, nice and round, no weirdness to correct at the seam, etc.  I was able to get both of mine dialed in to around 5% spoke tension variance which is about all you can ask for so no complaints at all here.

The Ride:
My first ride on the Quill was during the Pedal 50 gravel grinder put on by Pedal of Littleton (who run a fantastic event by the way).  It is 55 miles and 4,600ft of elevation gain exploring the back roads near Monument, CO.  For those who have not ridden Colorado’s dirt roads, there is lots of sandy sections, pretty constant, sometimes super steep rollers and rough, rough washboard sections.  Did I mention the roads are rough??

I was completely expecting these rims to feel at least a little bit flexy compared to the A23 but even when standing to crank up roller after roller I could not notice any more flex than my previous rims.  To be fair I could not tell that they felt any stiffer either so as far as lateral stiffness goes these felt on par with many other high end, similar style rims I have ridden such as the HED Belgium.  One thing I did notice in the first rough section was the little extra width the rim has, it is almost 2mm wider than the A23 and that was nice and took a little more of the edge off the endless washboard.

Conclusion:
After beating these wheels and myself up, flying through nasty braking bumps at 30+mph and mild single track I am pretty happy to see they are still holding true under my 200+lbs.  I will continue to try and put as much time as possible on them to see how they hold up over the long run and report back as necessary but currently I am pretty optimistic since I was told it is modeled off a combination of the Blunt SS and Aileron, both of which I have seen hold up very well.  This could be a nice, only slightly heavier alternative to the somewhat fragile Iron Cross, especially for someone who wants the ability to run road pressures or rim brakes.

***2 Year Update***
I have had these wheels for a couple years now and wanted to update things a bit.  In short, these wheels are still holding great although to be honest, I have not put a massive amount of miles on them.  Maybe 2k or so since the initial post.  For a little over a year I have been pretty hooked on racing at the Velodrome so my track bike has seen the buik of my ride time.  The cross bike mostly comes out for recovery rides and times that I just need to remind myself how to turn right…  I would absolutely continue to recommend these though and have built a handful of wheelsets with them and everything seems to be rolling happy with the rim.

***6 Year Update***
Still going strong!  They do have a bit of brake track wear now but they are also over 10k miles on them so that is to be expected.  I still continue to recommend them to this day when people want a nice aluminum rim brake wheel.

***Note: I paid for these rims completely out of pocket to test how they will hold up before recommending them to customers and was in no way paid or compensated for this review***