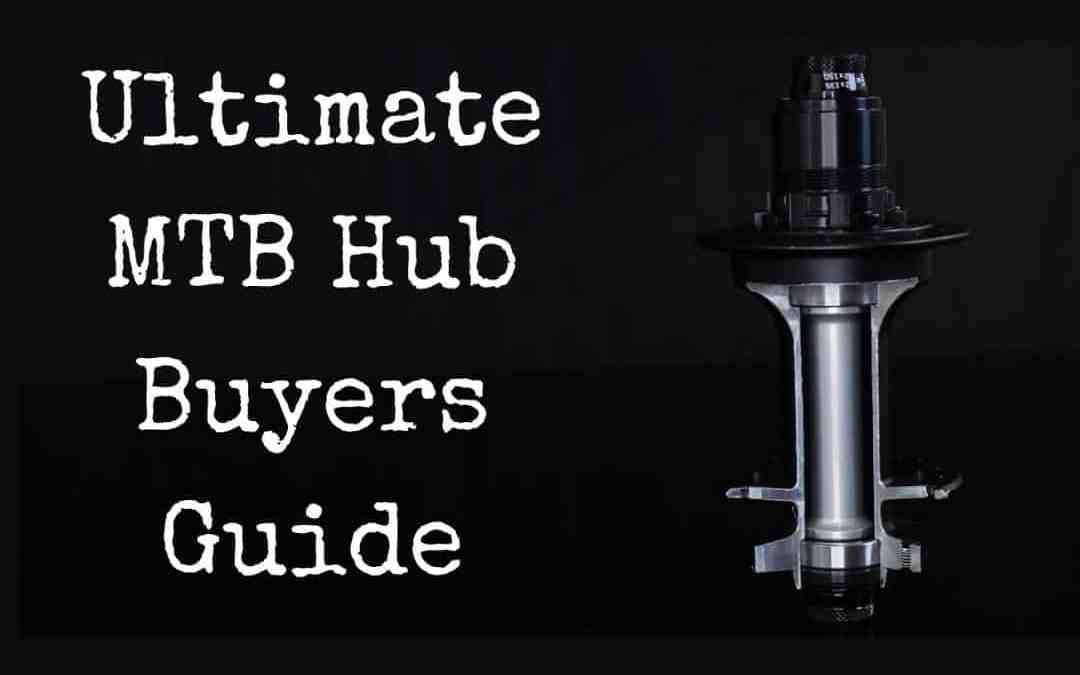 ​Today, I want to show you the differences among a lot of the more common high-end hubs on the market, these are no specific order other than just by cost, they’re all really good quality hubs, and you can’t really go wrong with any of them, although there are definitely slight differences between the different versions and obviously drastic price differences.

Spank Hex:
First off, let’s start with the Spank Hex hubs, these are relatively new, it looks like a really promising budget hub. First, thanks to Gorilla Gravity, they sent me this cut out hub so we can really get a good idea on what the drive system looks like on the inside of these hubs, how it works, and conveniently enough, this pawl system function similar to a lot of the other hubs on this list so seeing how this one works, it will give you a good mental picture on how a lot of the others will work as well, but this hub has 12 teeth, drive ring, six pawls, and it gives you a total of 35 degrees engagement of very fast engaging hub for not a whole lot of money. The Hub comes in black only and weighs 491 grams for Boost 6 boot, and the suggested retail on this hub is $298.  It’s super promising, but it is new enough that it’s too early to know if it holds up in the real world, but it definitely looks very promising.  I expect to build a fair bit of these in the future.

DT 350:
Next up is the DT-350. it’s a tried and true workhorse.  There are countless thousands of these hubs out there, they just simply work, nothing flashy, but just super reliable, priced well, easy to get ahold of, but the d350 comes with an 18 tooth star ratchet, but you can upgrade it to 54 tooth.  The 18 is admittedly fairly slow engaging, so there’s a lot of play in the cranks before you feel it engage, that’s kind of a bummer, but it is a reliable hub, and depending on your writing style, you may or may not notice that the 54 gets a fair bit better engagement, still not world class engagement, but definitely good enough to not be annoying, the only down side when you go up to the 52 tooth star ratchet is they do seem to be a little bit more sensitive to issues, if you don’t maintain them well and you get some dirt in there.  The DT-350 comes in black only and the hub weighs about 474 grams for boost 6 bolt, and the suggested retail on this hub set is $357.

Hope Pro4
So next up is a super popular one, that is the Hope Pro 4, these are super popular, but for good reason, it’s priced well, holds up well, the engagements decent and it comes in a lot of color options.  The Hope Pro 4 has a four pawl ratchet system, the 44 tooth driver in to get you 8 degrees of engagement, so again, not lightning fast, but fast enough to not be bothered.  You can get this hub in black, silver, red, blue, purple, and orange.  The weight on the hub set is about 499 grams for 6 bolt. These hubs are made in the UK in retail for $365 for the pair.

Industry Nine 1/1:
So next up is the I9 1/1 hubs. These are relatively new to the market and knocked it out of the park with this one.  It’s a fantastic hub and budget priced to I9 standards.  I really, really like this hub, it’s got 90 points of engagement, which translates to about four degrees worth of engagement through a six-pawl driver and only available in black. That’s one of the ways they drop the cost down, the hubs set 460 grams for 6 bolt and it’s made in the USA with a suggested retail of $425.  Industry Nine did a great job with it, almost so good that I feel like it’s going to hurt their hydra hub sales because this thing functions fantastic, so it’s pretty hard to go wrong.

Hadley:
Next up is Hadley, so Hadley is kind of a cool but weird company but they make fantastic hubs. You can tell they put a lot of care to what they’re doing, the downside of Hadley is they’re a little trickier to find, we can get them for you, but they’re not as readily available as some others.  Hadley for some reason still doesn’t have a website, no idea why they don’t but it’s a great hub nonetheless.  It definitely is on par with any of these high-end hubs from bigger brands, so it’s definitely worth looking at.  This hub has 72 points of engagement with a titanium driver, so your cassette is not going to dig into the freehub like some of the aluminum ones will and it still maintains a fairly low weight.  You can get Hadley in black, gold, red, silver or blue.  The hub set weighs about 567 grams for the pair and it is made in the USA with the suggested retail of $485.

The only difference between the two hubs is the way they attach the brake rotor, so the CLD is their center lock version, the XMR is their six Bolt.  I really like White Industries as a company and they make a fantastic product.  These have a three pawl driver with 48 points of engagement so they are relatively quick engaging.  They use a titanium driver, so they are super durable, and you don’t have to worry about your cassette digging into it like with some of the aluminum stuff.  Another bonus point for White Industries is you can swap their drivers between all of their hubs.  It makes servicing things and stocking parts significantly easier than a lot of other companies.  You can get these in a bunch of different colors, silver black, red, blue, gold, pink or purple, And, the hub set weighs about 489 grams for 6 bolt, they’re made in California with a suggested retail of $523.

Project 321:
So next up is another smaller brand that still hold its own with some of the big players really well, Project 321.  These guys have been around for a while and only recently started really crushing it with their hub game, they started off just using the I9 torch drivers and then developed their own that uses magnets in the pawls instead of springs so servicing them is super easy and it also cuts down on a little bit of the drag when coasting.  So with that driver system, they’ve got 216 points of engagement, they also have a 108 option.  So pretty much instant engagement, another cool thing you can do with Project 321 is switch between loud or quiet pawls.

So if you like a quiet hub, you can select the quiet pawls or if you prefer loud, pick the loud pawls.  They do that by just changing the amount of mass on the pawl so it snaps harder when it engages so it changes the tone a little bit, but it is a really cool, really well thought out design that runs super smooth.  You can get these in just about any color out there.  It weighs 451 grams for the boost hubset.

These are made in Bend, Oregon, and have a suggested retail 600, this is probably one of my favorite high-end hubs.

Industry Nine Hydra:
Next up is the I-9 hydra hubs.  They are really good hubs backed by great people.

These have 690 points of engagement or just a half a degree of movement before it engages so insanely fast. They work really well and hold up pretty well. You can get them in pretty much any color out there, the hub set weighs 451 grams for boost 6 bolt.  These are made in North Carolina with a suggested retail of $650.

Onyx:
So next up is Onyx, these guys are really big in the BMX world, but also starting to get really popular in the mountain bike world as well.  They are a little different than a lot of the others. They don’t use pawls like a lot of the other brands, they use a sprag clutch for engagement instead, they coast super smooth, there’s literally no noise when coasting, cause there’s no pawls snapping in and out of place.  It is truly instant engagement with the sprag clutch.  The downside is they’re heavier than a lot of the other stuff on the market, and they’re kind of spendy.  You can get them in just about any color.  These weigh in at 680 grams, so definitely the heaviest on the list, these are made in the US as well, with a suggested retail of $675.

Chris King:
Next up is Chris king, they’ve always been near the top of the list for high-end boutique hubs, but they use a Ring Drive system where like the DTs, you’ve got full 360 degrees of engagement whenever it’s engaged, not just a few points around the hubs, so it’s super strong set up fairly quick at 72 points of engagement.

It’s definitely one of the more complex drive mechanisms out there but it does work really well, it is a little more sensitive to maintenance compared to some of the other systems out there, but it still is a pretty resilient set up.  King also makes just about any color you can think of, they even do some really cool matte finishes and then they do your standard anodized stuff too, but chances are, if you can think of the color, they’ve got it available.  This hubset weighs about 543 grams for the set in 6 bolt.  These are made in Portland with a suggested retail of $700.  It’s a great hub if you want something that looks gorgeous.

DT 240s:
So next we have the DT 240s.  This is their older style 240, it has remained unchanged for a long time but for good reason.  It worked really, really well and they’re definitely the lightest in the test and probably one of the more durable.  They’re all really durable hubs, but these things seem to last forever. They ship with a 36 tooth star ratchet and can upgrade to 52 tooth if you want a little bit faster engagement.  These are only available in black with the suggested retail of $712.  You’ll start seeing these phase out a little bit in favor of their EXP hubs, but they’re still around, I figured I’d throw them in the list and I had one around the shop anyways.

They basically just got rid of some moving parts by holding the inner drive ring and made only the outer floating.  Less parts moving generally means more reliable and DTs are already really reliable, so I imagine these things will hold up really, really well.

You really can’t go wrong with any of these hubs in this test, just let personal preferences dictate which direction you head.

Thanks for reading!
Chris